Pop a Top, Again… (or, My New Obsession)

So I have a new obsession as of this year…home brewing.

A couple of summers ago, my brother bought me a Mr. Beer™ brewing kit for my birthday. Being the resident beer snob of my family, it seemed the next logical step. Either that, or he was telling me to put my money where my mouth was. Regardless, the kit sat in my garage for a couple of years as I am fundamentally lazy.

That changed this past December when I purchased the book My Beer Year by Lucy Birmingham. This book, the journey of a beer journalist to become a Certified Cicerone, inspired me to want to get out the kit and try it out.

I had to order a new tin of malt extract and yeast, as mine were past their expire dates due to my having let them sit. So I ordered an Oktoberfest blend and waited. A week later and I had everything I needed.

I watched the accompanying video and hit the online forums. I read everything I could get my hands on. And then brew day came. I followed the directions and brewed up the Oktoberfest. I then put the keg in my linen closet and prepared to wait.

Which is the hard part–the waiting (as Tom Petty will tell you).

It takes about 2-3 weeks for the yeast to do its job. So in the meantime, I bought another kit–this one a “real” brewing kit for 5 gallon batches, and started another batch of Scottish Ale. 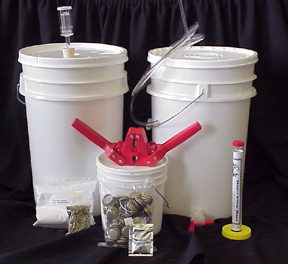 This one was a bit more complicated. It was still a kit, but involved a bit more “cooking” than the Mr. Beer™ kit. There were grains to be steeped, hops to be placed in the boil at specific times, and both dry and liquid malts. The Mr. Beer™ kit only used liquid malt, no grains, and cooked in a much shorter boil. It’s kind of the “Hamburger Helper” of brewing–but a great place to start.

I ended up scorching the malt on the bottom of the brew kettle, which will probably come back to haunt me with off-flavors in the beer later. I don’t know, we’ll see. This batch is currently percolating in the closet.

The Oktoberfest turned out pretty well, I think. I tested it this past weekend–tasted like a flat, but sweet, and tasty beer. It has now been bottled and is going through carbonation. That’s another couple of weeks. Waiting–again.

In the meantime, I’ve joined the AHA–the American Homebrewer’s Association. They give discounts at various places for homebrewers. I hope to get involved in the local homebrewers’ guild–if I can make one of their meetings. Suffice to say–I’m having a good time with this. Even if the beers I’ve done so far don’t turn out, I’m learning something and making something. That’s new for me, who doesn’t have a crafty bone in his body. I’m very excited. Plus I get to have unique beers.

As they say in the biz–Relax, don’t worry, have a home brew.

I am a professional librarian and a part-time writer that's working to do that the other way around. I currently live in North Texas in the lovely city of Denton (“The Home of Happiness“) with my lovely wife and the obligatory demon-spawn cats. When not writing, gaming, or watching cheezy kung-fu flicks, I can sometimes be found in a pub (or the American equivalent) enjoying a fine brew.
View all posts by Shedrick →
This entry was posted in Ramblings and tagged beer, brewing, cicerone, hobby, mr. beer. Bookmark the permalink.