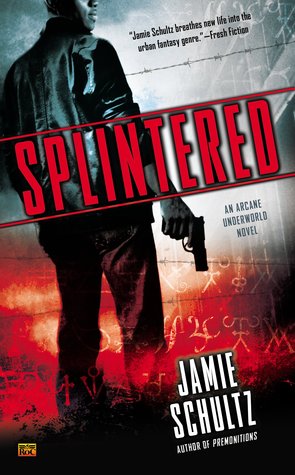 Ever since their last heist went to hell, Anna Ruiz has been trying to hold her band of thieves together for the sake of her best friend, Karyn Ames. Karyn is lost in an hallucinogenic hell of prophetic visions and the gang is in the clutches of Enoch Sobell, underworld kingpin and arcane sorcerer. Anna is desperate to find a cure for Karyn and a way out for her friends, but neither seem to be near at hand. And Sobell’s machinations may just have gotten them in over their heads–again.

In this sequel to the Schultz’s previous entry, Premonitions, the stakes are higher and the tone is decidedly darker. With graphic depictions of the price and results of dark magic and the dramatic toll it takes on one’s sanity, Splintered definitely delves more into horror than its predecessor, but that is no criticism. Schultz handles these scenes with a deft hand and leaves a chill down the spine. Further, as he did in the first book, he handles the action with an equally adept skill. All of the supporting characters get a chance to shine and are well-developed, allowing us to get the know them even more than we did from the first novel in the series.

Overall, Splintered, is a very satisfying entry in the Arcane Underworld series.

I am a professional librarian and a part-time writer that's working to do that the other way around. I currently live in North Texas in the lovely city of Denton (“The Home of Happiness“) with my lovely wife and the obligatory demon-spawn cats. When not writing, gaming, or watching cheezy kung-fu flicks, I can sometimes be found in a pub (or the American equivalent) enjoying a fine brew.
View all posts by Shedrick →
This entry was posted in Reviews and tagged novel, review. Bookmark the permalink.