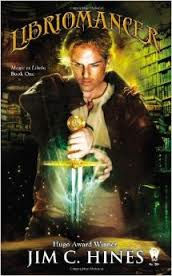 You don’t have to be convinced of that. The connection that is forged between a reader and an author is real and well-documented. Without that magical bond formed by scribbles on the page, websites like this wouldn’t exist.

But what if that connection was greater? What if that resonance was so great that some gifted people could reach into books and pull objects out of them, use that magic to affect the world around them? What if that magic birthed magical creatures that roamed the world and we had to be protected from the dangers of that magic? This is the central premise of Jim C. Hines’ Magic ex Libris series which begins with Libriomancer.

Isaac Vainio is one such libriomancer, one of the Porters, a secret society founded by Johannes Gutenberg (of printing press fame) to protect the world from various supernatural threats. He was banned from the field from delving too far into the magic (that way leads to madness) and has been delegated to cataloging duty in a small town in Upper Michigan. His quiet life is disrupted when a band of vampires that have leaked out of the pages of a Stephanie Meyer novel attack him at the library. With the help of Lena Greenwood, a motorcycle-riding dryad, he manages to escape and is drawn into a plot involving the kidnapping of his therapist, the disappearance of Johannes Gutenberg, and the very real possibility of an all-out war between the vampires and the Porters.

First and foremost, Libriomancer is a fast and fun ride. Hines has a quick wit and keeps the prose flowing. The tone is light, though this is deceptive—he delves into some fairly deep waters from time to time. Even when he’s dealing with heavy themes, his touch is gentle. The novel opens strong, gets a little bogged down in details toward the middle, but really opens up in the last third and delivers a strong climax, setting things up nicely for the next book in the series while wrapping up the main story in a satisfying manner. Mostly, this is a book about “how cool is that” and, for the most part, it delivers.

Libriomancy, as a concept, is a real winner. There is some potential here for some interesting uses of this magic system. One would think that the possibilities would be endless, but the book does address some of the abuses that could come from it. Apparently Gutenberg, the founder of libriomancy, magically sealed some books to keep them from becoming too dangerous. There will be no one running around with the One Ring, for example. And there is an interesting, though short, discussion on why pulling a time machine wouldn’t work. Unfortunately, as a character, Isaac is a bit of a one-trick-pony. His uses are fairly repetitive—either a variation on a gun, Moly from The Odyssey, or a cure from a gaming text. Even the characters comment on it. However, toward the end of the novel, you see glimpses of some of the potential of the magic system that perhaps will be revealed later in the series.

Character-wise, Hines delivers a likeable, if flawed, protagonist in Isaac. He tends to overestimate how much he can handle alone and tends to rush in too much (which got in him trouble with the Porters in the first place), but he is very sympathetic and is a good guy. He also acknowledges his flaws and mistakes and tries to do better by them, which is a nice change. Overall, he’s a finely drawn character, if a little typical of the geek-hero.

Lena is also a strong character, though sure to be controversial. She’s a dryad, created by magic, and therefore her nature is dictated by that magic. She tends to take on the personality traits partial to her lovers, and, as such, her free will is suspect (and thus is her character’s strength). Hines handles this with consideration and thoughtfulness, but his light touch may belie this consideration. In the course of the novel, her lover is taken and presumed dead or turned by vampires. Therefore, in order to ensure she doesn’t lose herself, she turns to Isaac to take on the role of her lover. But, in this she makes a choice–she is fighting for herself. In the text it is clear that she has such a strength and lust for life that there may be more to her than what was written on the page. However, one must acknowledge that there is an ugly history to the whole male fantasy of the dryad sex slave that hangs over the plot. Whether Hines is successful in working out from under this is the question. I felt that he handled these themes well and with consideration. Your mileage may vary.

Overall, Libriomancer is a fun, fast-paced adventure that, though a bit on the light side, offers some interesting ideas and relationships.

I am a professional librarian and a part-time writer that's working to do that the other way around. I currently live in North Texas in the lovely city of Denton (“The Home of Happiness“) with my lovely wife and the obligatory demon-spawn cats. When not writing, gaming, or watching cheezy kung-fu flicks, I can sometimes be found in a pub (or the American equivalent) enjoying a fine brew.
View all posts by Shedrick →
This entry was posted in Uncategorized. Bookmark the permalink.