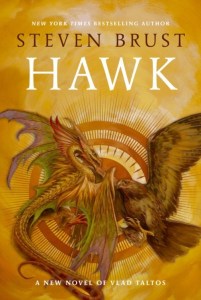 It’s been years since Vlad Taltos has been back to the Imperial city of Adrilankha. He’s been on the run from the Jhereg, the Dragaeran House of the criminal underworld, who he made extremely unhappy. He’s not been able to see his friends, his son, or his ex-wife, Cawti, in all this time. He’s also had to wear a Phoenix Stone to shield himself from sorcerous scrying, cutting himself off from magic. But Vlad’s tired of running. And now he’s a got a plan to get back in the Jhereg’s good graces (hopefully). It all hinges on the collection of certain objects, the study of obscure trade laws, a bit of witchcraft and sorcery, the help of his old friends, and learning to think like a hawk. And staying alive long enough to make it all happen.

Hawk marks the triumphant return of Vlad Taltos to Adrilankha and, in some ways, a return of the series to some of its old form. Back is the iconic (and ironic) assassin, wisecracking his way through the city with his familiar, Loiosh, on his shoulder, dodging danger at every turn and staying two steps ahead of his enemies (most of the time). It was good to see Vlad back on his home turf and getting some of his own back from the Jhereg. It’s been far too long. It was also good to see his friends again, especially Kragar. And smoggy Adrilankha, a character unto itself. The novel is a homecoming and doesn’t disappoint.

What also doesn’t disappoint is Brust’s writing. The dialog is witty (as per usual) and the prose is clever and quick. There is never a dull moment in the book–and this is a novel in which much of the book is spent with Vlad walking up one side of the city and down the other. Quite the accomplishment.

All in all, an enjoyable return to a remarkable series.

I am a professional librarian and a part-time writer that's working to do that the other way around. I currently live in North Texas in the lovely city of Denton (“The Home of Happiness“) with my lovely wife and the obligatory demon-spawn cats. When not writing, gaming, or watching cheezy kung-fu flicks, I can sometimes be found in a pub (or the American equivalent) enjoying a fine brew.
View all posts by Shedrick →
This entry was posted in Reviews and tagged fantasy, fiction, novel, review, steven brust. Bookmark the permalink.