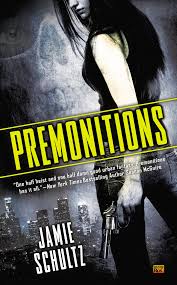 Karyn Ames runs a tight crew of thieves whose specialty is purloining items of the occult. There’s Anna, her right-hand–solid and dependable, her best friend since high school. Nail is the muscle, tough as his name and equipped with military discipline and training. Tommy is the occult expert–squirrely, but he knows his stuff. And Karyn herself has a peculiar talent. She can see the glimpses of the future in visions that superimpose themselves over the present. Thus, she can sometimes see dangerous situations and the double-cross before they come. But sometimes the visions grow too much to bear, with possible futures intruding on the present so much that the two become interchangeable. Then Karyn needs to take “blind”, a rare, highly expensive drug, to keep the visions at bay. Thus, the life of lucrative crime…

Now Karyn’s team is working for Enoch Sobell, a criminal overlord with a reputation for exclusivity: once you work for him once, you work for no one else. But with a two million dollar pay off, this clause may be worth it for Karyn’s crew. Soon, however, the job goes south and everyone–including the unflappable Mr. Sobell–find themselves in over their heads and desperate to find a way to neutralize a certain object before its too late.

Premonitions is both a heist novel and an urban fantasy with enough twists and turns to satisfy lovers of both genres. The plot is fast-paced and tight and the characters are well-drawn and interesting. In fact, Enoch Sobell’s backstory is probably worthy of a prequel or two. The author hits all the right stops, but this is by no means a “paint-by-the-numbers” book. It simply stands out as being a well-executed example of genre. A sequel is in the works and I, for one, am looking forward to it. Schultz is an author to watch.

I am a professional librarian and a part-time writer that's working to do that the other way around. I currently live in North Texas in the lovely city of Denton (“The Home of Happiness“) with my lovely wife and the obligatory demon-spawn cats. When not writing, gaming, or watching cheezy kung-fu flicks, I can sometimes be found in a pub (or the American equivalent) enjoying a fine brew.
View all posts by Shedrick →
This entry was posted in Reviews and tagged fantasy, fiction, jamie schultz, novel, review, urban fantasy. Bookmark the permalink.