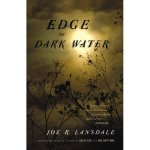 Anybody who’s read my blog for a decent length of time should know that I love me some Joe R. Lansdale. The East Texas author has such a unique voice and crafts such deliciously weird stories–if he put his name on the front of the phone book, I’d give it a serious read.

His latest, Edge of Dark Water is yet another triumph, a notch in his worn, tale-slinger’s belt.

This Depression-era story begins when the body of young woman, May Lynn, is found dead in the Sabine River with a Singer sewing machine tied around her feet. She had always been a beauty and had dreams of leaving their ramshackle East Texas town for Hollywood. Now she wouldn’t be going anywhere special. Her friends–Sue Ellen, Terry, and Jinx–decide to burn her remains and take them to Hollywood; to fulfill their friend’s last wish and to let the river take them out of their go-nowhere lives.

But in a Lansdale book, things don’t ever come easy. Sue Ellen and her friends manage to find some stolen money that might just be what May Lynn was killed for. Soon, after they are joined by Sue Ellen’s laudanum-addicted mother, they find themselves running away from a corrupt constable, Sue Ellen’s odious uncle and abusive father, and the legendary, aptly-named killer, Skunk.

Lansdale’s voice, filtered through Sue Ellen’s narration, is simply beautiful. The cadences and phrases ring true to the time and place of the tale and carries the reader along on a torrent of wry observations and stinging metaphors. The novel is an entirely immersive experience–largely due to Lansdale’s mastery of description and characterization.

This novel is about escape and discovery. All of the characters participate in this mad scheme because they want to escape the joyless lives that fate seems to have planned for them. Sue Ellen wants to escape her mother’s fate–being tied to a good-for-nothing man. Terry wants to escape his step-family and the label of “sissy” he’s acquired around town. Jinx wants to escape the deep racism of her neighbors and the drudgery of her family’s life. At the same time, Jinx discovers what lengths her anger can drive her to, Terry discovers what it means to forgive himself and be forgiven, while Sue Ellen discovers that there is much more to her mother–and to the life she leads–than she believed.

Along the way, the friends meet hardships both natural and decidedly man-made. Extreme violence at the hands of greedy men and an insane, implacable, hunter. Religious intolerance. Love and understanding. Essentially–the river takes them all on a journey of a lifetime and reveals to them who they really are.

Lansdale is dipping a bit into the same well as he did for his Edgar-award-winning The Bottoms and the wonderful short story “Mad Dog Summer“. Nevertheless, Sue Ellen’s story is fresh and original. As before, the picture he paints of Depression-era East Texas is as vivid as it is bleak. The oppressive poverty and ignorance weighs on the souls of all the characters, impressing the setting with a through-line of darkness that dances, snake-like, through the tale. The river is referred to, rightly, as the Kingdom of the Snake–though it’s hard to say whether it’s due to the water moccasins or to the souls of the people depicted in the story. Some look mean but just want to slither on, while others look innocent but are filled with angry poison.

Funny, literate, terrifying, lyrical, sad, vulgar, uplifting: Edge of Dark Water is all of these things and much, much more.

Do not deprive yourself of the experience of this book.

I am a professional librarian and a part-time writer that's working to do that the other way around. I currently live in North Texas in the lovely city of Denton (“The Home of Happiness“) with my lovely wife and the obligatory demon-spawn cats. When not writing, gaming, or watching cheezy kung-fu flicks, I can sometimes be found in a pub (or the American equivalent) enjoying a fine brew.
View all posts by Shedrick →
This entry was posted in Reviews and tagged books, fiction, joe r lansdale, novel, review, thriller. Bookmark the permalink.